This burst tomato and spinach pasta is super simple to whip up when using the freshest summer tomatoes. Serve with a protein of your choice to make it a meal.

One of the things I look forward to most when the outdoor farmers market opens up for the season are super fresh, ripe tomatoes. I actually feel like I’ve become a bit of a tomato snob because I avoid eating store-bought tomatoes in the winter time. I usually just buy the canned tomatoes while I wait for summer tomatoes to return!

I created this burst tomato and spinach pasta dish the other day to utilize some of the extra cherry tomatoes we had bought. (I get a little too excited about those market tomatoes!) For being such a simple dish with less than 10 ingredients, I was pleasantly surprised that it was so delicious!

What to Serve with This Pasta

To make it a meal, I served the pasta with a sliced up vegan Italian sausage. If you want to make this pasta vegan, simply leave off the goat cheese or use a crumbled vegan mozzarella (I like Miyokos). 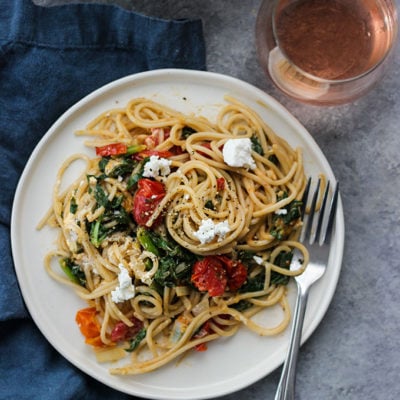