A classic dessert gets a makeover with this vegan bourbon apple crisp recipe. Coconut oil is the secret to the vegan crumb topping!

Will and I are headed to Pictured Rocks State Park in the upper peninsula tomorrow to celebrate our 1 year wedding anniversary! I’m crossing my fingers that the trees up there have burst into their pretty fall colors. 🙂 In order to use up a few extra apples we had hanging out on the counter before our trip, I made a pan of this delicious vegan bourbon apple crisp. I’m not usually one to reach for a fruit based dessert (give me all the chocolate!) but crisps are my weakness.

The secret to making a vegan friendly crumb topping was to replace the butter with coconut oil. I had success using coconut oil in a summer crisp before and couldn’t wait to try it again on this apple version!

The bourbon here adds delicious depth to the sauce that forms while the crisp cooks. I’m not the biggest fan of bourbon but my partner loves it so he always drinks it. Serve this vegan bourbon apple crisp with a dollop of vanilla ice cream (vegan or regular) –> heaven! 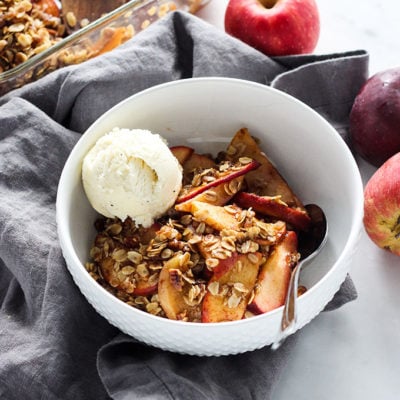 For the Apple Layer:

For the Crumb Topping: