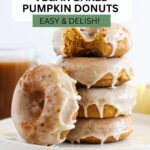 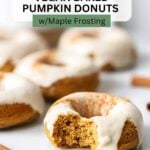 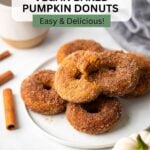 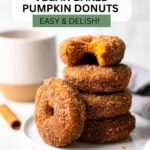 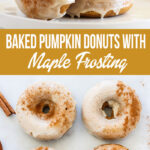 Is there anything better than sitting down with a cup of coffee and a homemade treat? These vegan baked pumpkin donuts with maple frosting or cinnamon sugar are just the thing for treating yourself on a lazy weekend morning.

What is your favorite holiday dessert? Although cinnamon rolls are typically what we ate as a sweet breakfast during the holidays, these pumpkin donuts may just become a new tradition! They are way easier to make than cinnamon rolls and just as delicious if you ask me.

How to Make this Recipe

STEP 2: Add vinegar to the soy milk, stir, and set aside. (This creates a vegan buttermilk.)

STEP 3: Sift together the flours, baking powder, baking soda, pumpkin spice, and salt together in a large mixing bowl.

STEP 4: Whisk together the milk, sugar, pumpkin, oil, and vanilla. Pour the wet ingredients into the dry ingredients. Stir just until combined.

STEP 5: Fill piping bag (or ziplock bag) with batter. I find that standing the piping bag up in a glass helps with filling it! Pipe the batter into your donut pan, evenly dividing it between the 6 wells.

STEP 6: Bake for 12-14 minutes or until toothpick inserted into donut comes out clean. Allow to cool in the pan for about 5 minutes before transferring the donuts to a cooling rack.

If you want to make the maple glaze: Sift powdered sugar into a large mixing bowl. Add the maple syrup and 1 tablespoon of milk. Whisk together. Start adding more milk a teaspoon at a time until you have a thick but pourable glaze. Spoon glaze onto cooled donuts. Let glaze set for at least 5 minutes to harden.

Can you freeze baked pumpkin donuts?

Yes, you can freeze these for up to 3 months in an airtight container or ziplock bag. If you plan to glaze the donuts, wait to glaze them until after defrosting. Defrost in the refrigerator overnight. You can also reheat for a few seconds in the microwave.

Can I bake pumpkin donuts in a muffin pan?

Yes, add the batter to 6 wells of a muffin pan and bake at 350 degrees Fahrenheit for 16-18 minutes or until toothpick comes out clean. You can also check out this chocolate chip pumpkin muffin recipe if you want muffins.

What do I serve with baked pumpkin donuts?

I like to balance a sweet breakfast treat like these pumpkin donuts with a savory dish that has some protein. Here are a few yummy options: mini vegan frittatas, vegan broccoli cheddar quiche, easy vegan tofu scramble.

Looking for more pumpkin recipes? Check out these! 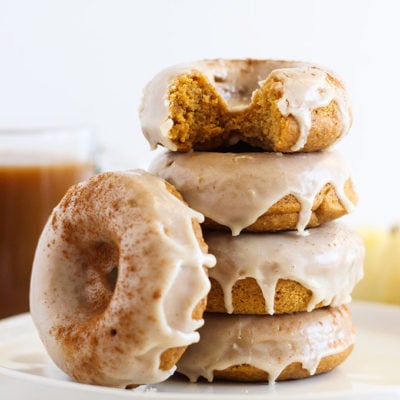 
Course Breakfast, Dessert
Cuisine American, Vegetarian
Prep Time 10 minutes
Cook Time 15 minutes
Total Time 25 minutes
6
Is there anything better than sitting down with a cup of coffee and a homemade treat? These vegan baked pumpkin donuts with maple frosting or cinnamon sugar are just the thing for treating yourself on a lazy weekend morning.
Print
Pin
Share
Rate
Prevent your screen from going dark

For the Maple Glaze

For the Cinnamon Sugar

To bump up the maple flavor in the frosting, feel free to add up to 1/4 teaspoon maple flavoring.