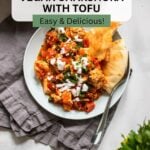 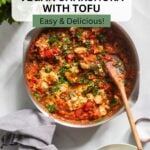 This vegan tofu shakshuka can be whipped up in one skillet from a can of tomatoes, spinach, a package of silken tofu, and spices like cumin and paprika. Serve it with some toasted pita for dipping and you have a delicious one pot meal.

Let’s make some shakshuka! Have you ever heard of it? Will actually introduced me to this dish when we were first dating and we have been making it ever since. Now that I’m vegan, we make this shakshuka without eggs and it’s just as good as the original.

Shakshuka is made up of eggs cooked in a thick tomato sauce with peppers, onion, herbs, or spices that is usually served with some bread on the side. The origin of the dish is debated, but most historians believe it originated in Yemen or Tunisia. This dish remains wildly popular today since it is so simple to make in just one pot. The word shakshuka comes from Arabic, meaning “all mixed up”. In present day Turkey, a dish called menemen that is very similar to shakshuka is a popular breakfast dish.

This one pot dinner couldn’t be any simpler. You’ll want a large, deep skillet so you have enough space for everything to cook down.

STEP 1: Add the oil, pepper, and onion to a pan and sauté on medium heat until softened, about 5 minutes.

STEP 2: Stir in the garlic, spices, and tomato paste. Sauté for another 1-2 minutes.

STEP 3: Stir in the tomatoes and simmer until they start to thicken.

STEP 4: Stir in the spinach and cook until wilted, about 2 minutes.

STEP 5: Stir in the crumbled tofu and cook until tofu is heated through. Garnish with fresh chopped parsley. To serve, add some crumbled vegan feta cheese if desired.

Yes! Shakshuka is a delicious, healthy meal that is also incredibly easy to make. The bulk of the dish is made from tomatoes, which are rich in vitamins C and K, potassium, and folate. Tomatoes are rich in an antioxidant called lycopene that has been associated with and lower risk of heart disease and certain types of cancers . Processed tomatoes liked the canned tomatoes used in this recipe, have even higher amounts of lycopene.