Crystallized ginger adds a fun twist to a classic summer dessert in this ginger peach crisp that also happens to be vegan!

After a couple week hiatus, I am back with this fun spin on a classic summer dessert! In the meantime, I have been savoring the summer since it’s so fleeting here in Chicago. Including lots of shopping at the farmers market, bike rides around the city, and my favorite – Shakespeare in the Park last weekend!

So, I want to eat this vegan ginger peach crisp on repeat until the last of the peaches sell out at the farmer’s market. I got the idea to add crystallized ginger to a crisp from this recipe on Epicurious. After trying it for this recipe, I am obsessed! I love all things ginger and usually add it into my smoothies, but was excited to try it out in a classic dessert like this. Originally, I thought the ginger pieces might melt into the fruit as it baked, but they stay relatively whole. They add a bit of flavor to the whole dish, but also provide some super gingery bites.

This recipe is also vegan since the crisp topping is made with coconut oil rather than butter. I topped mine with Halo Top ice cream (which isn’t vegan) but so delicious! Hope you love this crisp as much as I do! 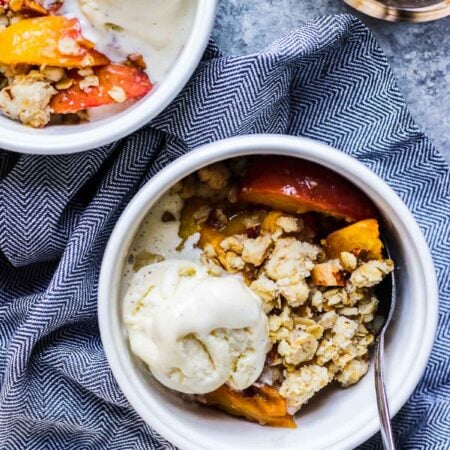 For the Crumb Topping

For the Peach Filling

Serve warm with a scoop of your favorite vegan ice cream.