Disclosure: Imperfect Produce sent me a few weeks of free produce boxes to try. I loved it so much I wanted to share it with you! They are a produce delivery company that fights food waste by finding a home for ‘ugly’ produce by sourcing it directly from farms and delivering it to your door in a convenient subscription box.

Take advantage of the last of the winter citrus at the store and make this simple citrus and fennel salad. Fennel isn’t something I usually pick up in the grocery store, but I received some in my recent Imperfect Produce box so I was curious to test it out in this salad recipe. Imperfect Produce is a produce delivery service that also fights food waste by purchasing “ugly” produce directly from farmers that would otherwise go to waste because it didn’t fit grocery store standards. The produce is still totally edible, delicious, and priced really well. They currently offer delivery to the Bay Area in California; Los Angeles, CA; Orange County, CA; Portland, OR Metro Area; Seattle, WA Metro Area (includes Tacoma); and Chicago, IL Metro Area but hope to be expanding soon! 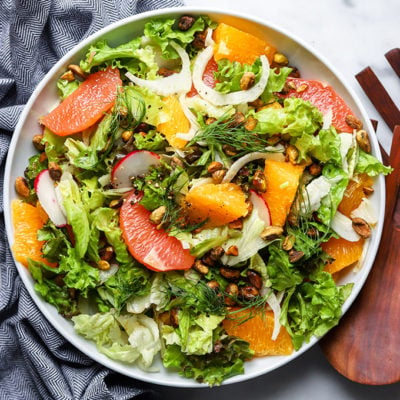