this …
Do you like experimenting with new ingredients in the kitchen? What’s the most recent new-to-you ingredient that you’ve tried? For me, it’s farro! I had used it once before for a recipe I developed for Food and Nutrition Magazine, but realized that I had never shared anything with it on the blog. Plus, I wanted to play with this yummy grain again. (Also, the Recipe Redux challenge for the month happened to be to use a new-to-you ingredient)! Last weekend was bitter cold here in Chicago, so soup was on my mind. Luckily, farro works very well in soup! For those who aren’t familiar with it, farro is an ancient grain in the wheat family and very similar to barley when cooked. I loved the chewy texture that it added to this soup. You can find it in the bulk bins or the baking/grain aisle.

Don’t you just want to curl up on the couch with a bowl of this Italian farro soup? I do! Unfortunately, I’ve already eaten all the leftovers… The recipe for this soup is actually vegan, but I made it non-vegan by topping with cheese and serving with buttered toast – which I highly recommend!

Did you make a pot of this soup? Take a pick and tag me on Instagram! I love seeing what you are cooking up. 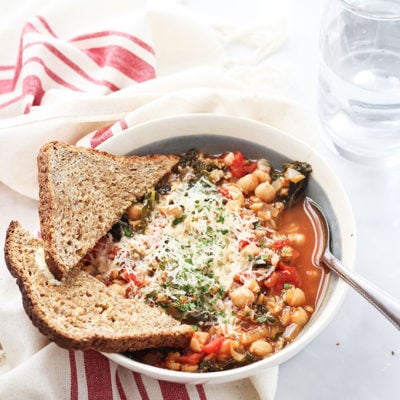