This vegan tortilla soup tastes like it was cooking on the stove for hours but can actually be whipped up in about 30 minutes! #vegan #glutenfree

Spring has arrived, but if you live in the midwest like me it is still cold enough for hearty soups! This vegan tortilla soup is super simple to make and the perfect dish for a cozy night in. It reminds me a lot of my vegetarian chipotle chili which has the same warm and cozy vibes.

What is tortilla soup?

How to make vegan tortilla soup

This soup couldn’t be easier to make! You essentially just toss everything in to a large pot and let it simmer. I think the flavors develop some over time and it tasted even better when eating it the next day!

How to Fry the Tortilla Strips

You’ll definitely want to top your tortilla soup with some fried tortilla strips! While the soup simmers, you can make the fried tortilla by thinly slicing 4-6 corn tortillas in to 1/3 inch strips. Add enough canola oil to a skillet to coat the bottom and heat on high. Add tortilla strips in batches (you don’t want to overcrowd them) and fry them until they start to turn golden brown. Transfer to a plate lined with a paper towel and sprinkle with salt. As they cool they will start to crisp up.

Looking for more Mexican-inspired recipes? Try one of these! 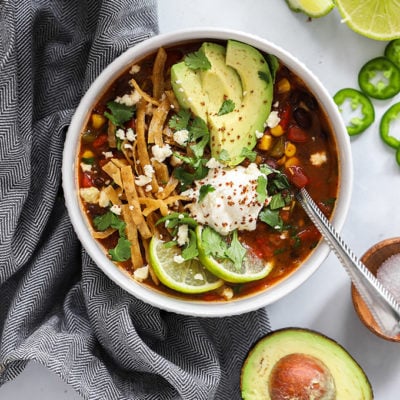 
Course Entree, Main Dish, Soup
Cuisine Gluten-free, Mexican-Inspired, Vegan
Prep Time 5 minutes
Cook Time 20 minutes
5 Servings
This vegan tortilla soup tastes like it was cooking on the stove for hours but can actually be whipped up in about 30 minutes!
Print
Pin
Share
Rate
Prevent your screen from going dark

To Make the Tortilla Strips: 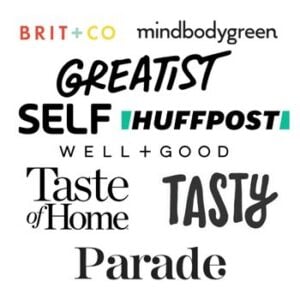