Growing up, we never really had pop tarts much for breakfast. We did go through a phase where we ate a LOT of toaster strudel though. The other day, I picked up a pie crust at the store without any real plans for it. I didn’t really want to make a pie, but I was craving something sweet so I landed on pop tarts. I figured that the pears we had sitting on our counter would make for a tasty filling so these vegan ginger pear pop tarts were born.

I am obsessed with the filling for these and actually make something very similar to put on my oatmeal in the morning. It’s super simple to make too, you just add sauté some chopped pears in coconut oil, water, ginger, maple syrup, and cinnamon until tender. As it cooks, it starts to form a syrupy sauce that is just heavenly. I’m thinking these ginger pear pop tarts would be perfect for a special holiday breakfast or brunch. 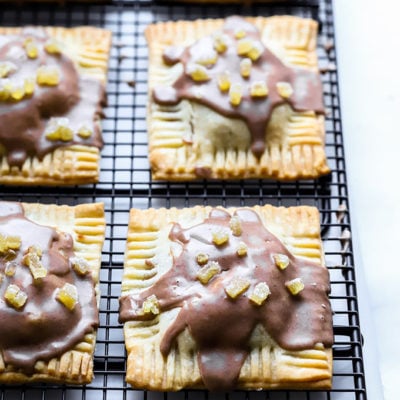 For the Pop Tarts