These easy vegan tacos with seitan have become a staple in our rotation of easy weeknight dinner meals. This is a great recipe to try if you are new to seitan, even meat lovers will love this recipe.

In an effort to make meal planning during the week a little easier, we have been trying to do more themed weeknight meals. For weeks now, we’ve been loving taco Tuesdays. These easy vegan tacos with seitan are our go-to recipe for taco night. The filling is super simple to make and can convince even the most diehard meat eaters to give it a try. Some other simple weeknight meals we’ve been loving are: Mexican tempeh skillet casserole, vegan loaded sweet potatoes, and this teriyaki tofu sheet pan.

Seitan is plant-based protein food made from vital wheat gluten. Although it is popular now among plant-based eaters, it has actually been around since the 6th century. Seitan was a common meat alternative for adherents of Buddhism in China. You’ll often find seitan used in vegan/vegetarian recipes in place of beef or chicken since it has a similar chewy texture.

You can make your own seitan at home with vital wheat gluten, water, and a bit of patience. (Here’s a recipe if you are interested!) However, we usually just buy ours at the grocery store; you’ll usually find it in the refrigerator with the tofu and other plant-based products.

How to Make Easy Vegan Tacos

STEP 1: Add oil and ground seitan to large skillet over medium-high heat and sauté until golden. Stir in the taco seasoning.

STEP 2: Pour in the water and stir. Bring to a simmer and cook until most of the water has cooked off and sauce has thickened. Then, assemble your tacos!

What to Serve with Seitan Tacos

We love to serve our tacos with a simple side of cooked zucchini and onion. To make the zucchini pictured in the post, we just thinly slice a couple of zucchini or yellow squash and a yellow onion. Toss with about 1 teaspoon each onion powder, garlic powder, and paprika. Bake at 400 until tender, about 30 minutes. Season with salt and pepper. So simple! Other sides options include chips and homemade guacamole or a salad like this one with a delicious spicy cashew dressing.

You can also use the cooked seitan filling for this taco recipe in nachos! We were craving nachos one night and used the seitan taco meat from this recipe in this vegan nacho recipe. It made for a fun date night option of build your own nacho plates.

Want to serve these with a margarita? Try out my strawberry mint margaritas or my simple rosemary margarita recipe!

Make Ahead and Storage

You can make the seitan taco filling in advance and store in the fridge in an airtight container for up to 3-4 days. Reheat in the microwave for a few seconds before using or add to a skillet and reheat on the stovetop (~5 minutes). The seitan can also be frozen after cooking. Put back in the fridge to thaw the night before using and then reheat in a skillet. 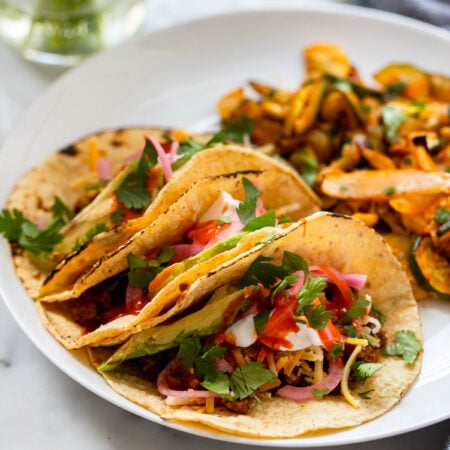 Course Entree, Main Dish
Cuisine Mexican-Inspired, Tex Mex
Prep Time 10 minutes
Cook Time 10 minutes
3 servings
These easy vegan tacos with seitan have become a staple in our rotation of easy weeknight dinner meals. This is a great recipe to try if you are new to seitan, even meat lovers will love this recipe.
Print
Pin
Share
Rate
Prevent your screen from going dark

For the Seitan Taco Filling