This vegan broccoli and cheese soup is a big bowl of comfort food for the rainiest of days. Made with a few simple ingredients like carrots, potato, broccoli, nutritional yeast, and coconut milk. Serve it up with some crunchy croutons and a sprinkle of paprika.

The last few rainy and cold days here in Chicago had me craving soup! What’s your favorite soup on a rainy day? It has been ages since I had a good bowl of broccoli cheddar soup so I thought I would recreate a recipe I could share here. Rather than doing a traditional broccoli cheddar with cheese and milk, I made a vegan version which is just as creamy and delicious. The secret to the creaminess in this version is canned coconut milk and pureed potato and carrot. You won’t even miss the cheese!

How to Make this Soup

First, you’ll steam the carrot and potato together and then add to a blender with some broth, soy sauce, nutritional yeast, smoked paprika, and red wine vinegar and puree until smooth.

Meanwhile, cook the onion and broccoli together and then add the broth and coconut milk. Once that is simmering, you’ll stir in the carrot/potato puree and bring to a simmer again.

Transfer 1/2 of the soup to the blender and puree or use an immersion blender to puree some of the soup. (Can puree fully if you like a smooth soup.) Add that back to the pot with the rest of the soup and stir. Stir in some shredded vegan cheddar cheese if desired.

Common Questions about this Vegan Broccoli and Cheese Soup

How to Serve this Vegan Broccoli and Cheese Soup

One recipe makes enough for 5 large filling bowls of soup and the leftovers keep well in the refrigerator for up to 3 days.

Looking for more tasty soup recipes? Check out these! 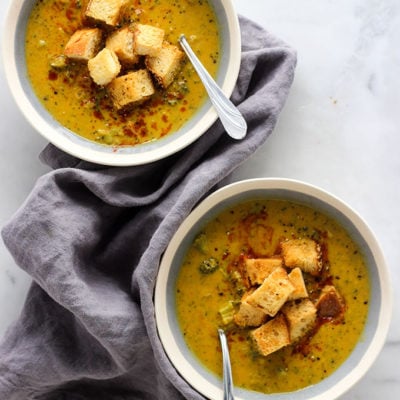 
Course Entree, Soup
Cuisine American
Prep Time 10 minutes
Cook Time 25 minutes
Total Time 35 minutes
5
This vegan broccoli and cheese soup is a big bowl of comfort food for the rainiest of days. Serve it up with some crunchy croutons and a sprinkle of paprika.
Print
Pin
Share
Rate
Prevent your screen from going dark

Recipe makes about 7 cups of soup.  Nutrition facts below include plain soy milk.  Psst! Don't toss your broccoli stems! Peel them so that you are left with the tender core and chop up with the rest of your broccoli. You won't even be able to tell they are there in the finished soup!