We’ve finally reached peak summer produce season in Illinois and I could not be more excited. Our local farmers’ market opened again with extra COVID-19 precautions in place and I was more than happy to mask up to get my hands on fresh heirloom tomatoes. Those tomatoes are the star of the show in these vegan caprese naan pizzas.

Tips for making these Vegan Tomato and Pesto Naan Pizzas

There’s not much to it! Assemble your pizzas and bake them on a baking sheet at 400 degrees until golden brown. I have also had success baking them one at a time in a toaster oven. We haven’t tried it out on the grill yet, but that’s next!

Pre-bake your naan for 3-4 minutes before adding the toppings and baking until the cheese is melted for an extra crispy crust. 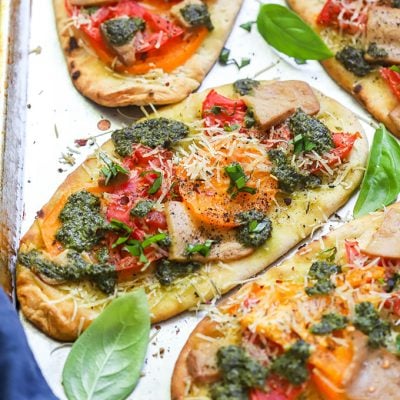