I made you a pie! You’ll come over and help me eat it right? A whole pie is entirely too much for just the two of us and it is just too good to not keep sneaking bites all day… For a couple of weeks now I’ve been mulling over how to create a recipe for a tasty vegan pumpkin pie/cheesecake mashup.

One problem that I find with nut based vegan/raw recipes is that they can be pretty heavy. (All that cashew cream!) Which is how I finally came up with this lovely vegan pumpkin pie with cashew cream swirls. Mostly pumpkin pie, but with a little of the richness of the cashew cream that makes vegan cheesecakes so good.

If you want to impress your family/friends on Thanksgiving, this is the pie to bring! Definitely make this the day before your holiday gathering as with any pumpkin pie, you need to let it chill in the fridge for at least a good 6 hours, if not overnight.

Also, since I am not even going to pretend to be a pie crust expert, I used this vegan coconut oil pie crust recipe from Vanilla and Bean and it turned out great! I used a whole wheat flour in place of all-purpose flour so my crust was just a little darker in color. The recipe also makes a little extra dough than you need for a single 9 1/2″ pie , so I used the scraps to cut out little leaves to rim the edge of the pie. 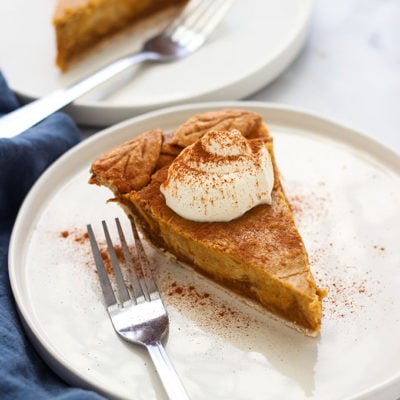 For the Cashew Cream

For the Pumpkin Filling