A creamy apple cinnamon amaranth porridge is a great way to switch up your usual bowl of oatmeal with this new unique seed/pseudocereal.

Growing up, one of my favorite breakfast options was Cream of Wheat. Anyone else a fan? It has actually been years since I’ve had it now. This apple cinnamon amaranth porridge reminds me of a creamy bowl of cream of wheat but with a unique twist. As a dietitian, I am always interested in trying new grains/ingredients so I picked up some amaranth from the bulk bin at my last trip to the store.

Amaranth is a tiny seed similar to quinoa that is packed with protein, calcium, and fiber. When cooked, its flavor is also similar to quinoa. Cooked in water or milk, amaranth will form a sticky porridge similar to cream of wheat – perfect for a hearty breakfast!

I topped this version with some apples sauteed in coconut oil – yum! The amaranth has a mild flavor which lends itself well to both sweet and savory dishes. I found the amaranth I used in this recipe in the bulk bin aisle at Whole Foods. You can also look for it in the gluten free aisle of your grocery because it is naturally gluten free. 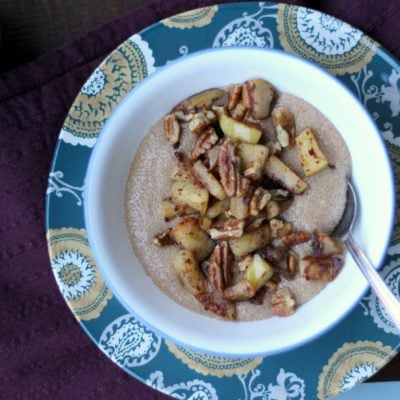